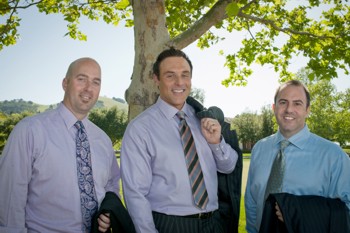 The three founders of Landmark Mortgage Group are proof that good friends make good business partners. Todd Allen, Rick Benitez, and Tony Russo have known each other since they were teenagers. They have spent summers at the lake, golfed, and gone to car shows together. They were in each others' weddings, and now their children play together.

More than 15 years ago, they followed each other into the mortgage business, and in February 2010, with their close relationship having endured over half their lives, they took on their ambitious project yet: launching their own firm.

"Being in a profession that you really enjoy is great," Benitez comments. "To be able to share it with friends makes it exceptional."

It all started back in the early 1980s, when Todd Allen, who grew up in Pleasanton, and Rick Benitez, born and raised in San Diego, first met. "Todd's step-brother was married to my sister," says Benitez. The two boys, around 13 at the time, hit it off. Tony Russo, from Dublin, entered the picture toward the end of high school, when he befriended Allen. Recollections of their first meeting are somewhat hazy, but Allen theorizes it had something to do with their shared interest in old cars. They started mixing with each others' friends, and the Benitez-Allen duo morphed into a trio.

After high school their paths diverged. Russo, never comfortable in the academic environment, took classes at Las Positas and Ohlone colleges. He also got a good start in the hotel business, working his way up over five years from bellman to the front desk. He felt the hospitality industry was his calling. It was always interesting, and he liked the challenges of helping guests, often going to great lengths to satisfy their requests. Two incidents in particular stand out: locating a jeweler to repair an unusual watch, and finding brakes for an obscure model Porsche and then having them shipped to Spain. His resolve to triumph in each quest showed up in regular success. "I believe that whatever you do, you should do it the best you can," he maintains, revealing a commitment to persevere and over-deliver that also characterizes his friends.

In the meantime, Benitez attended college in San Diego. He minored in real estate finance, but he had no specific career in mind. After graduation, he got a job in sales, still in southern California. Allen, who went to Foothill High in Pleasanton, attended junior college for a few years. He, too, was unsure of what he wanted to do professionally.

What happened next was the game-changer. In 1993, a friend of Allen's brother started a mortgage company and approached Todd about a job. "He came to me and said, 'I think you'd be good at this,'" he recalls. There were just four people with the company when he took an entry-level position as a loan agent cold-calling for prospects. "I took a liking to the business, and when things started going well, I suggested to Rick that he might like it, too. He was a people person, good at sales." Feeling no strong ties to southern California, Benitez took him up on the offer. He and Allen soon became not just co-workers but roommates.

Russo's interest had been building as well. One day he went to work with Allen and really liked what he saw. "I asked Todd's manager what I would need to do to get on board," and he was soon preparing for the licensing test. "My mother-in-law helped me study," he notes. License in hand, he went back and asked for the job. By late 1994 all three were at the company where they would stay for the next 10 years.

"I tried to get as many friends involved as I could," Allen reflects. "Some didn't pan out, but Rick and Tony did."

"When you're trying to get in the door, it certainly helps who you know. That's how business works," Benitez comments. "But you have to perform and earn a place through merit. Many others tried to get in the business and did not succeed, but each of us made the most of the opportunity. We decided to make it our craft and become true professionals. We wanted to be known for the high-quality work we did and as experts in the services we provided." They knew they were fortunate to have each other as colleagues.

In 2004, the trio went off in different directions, but by 2007 they had reassembled to open a small mortgage branch in Livermore, which eventually became the cornerstone of Landmark Mortgage. Their first decision was typical of the consensus-building that permeates their relationship: although they wanted attractive offices, they opted for a conservative start in small and inexpensive commercial space in Livermore. It was a wise move. The industry soon began to stumble, and all agree that, had they been less cautious, they probably would not have survived.

Instead, while many mortgage companies closed down, "we found ourselves growing," Benitez says.

"The people left in this business are the cream of the crop," observes Russo. "My competitors are also phenomenal. It's good to be competing against people with strength and integrity who have weathered the storm."

In February 2010 Allen, Benitez, and Russo had the opportunity to launch Landmark Mortgage Group as an entity they would own. Each of the friends has a formal title in their corporate papers, but they prefer to operate on an equal footing. This shows up in shared decision-making, the high regard accorded to their employees, and their insistence on originating loans themselves, even as owners of the company. It is also manifest in Landmark's success, with four branches and growing, and production for 2010 in excess of $300 million.

While clearly demonstrating their skills as businessmen and financiers, they also recognize the individual strengths that make their leadership even more effective. "We all bring something different to the table and respect each other for our differences," Allen comments. Russo is seen as "the thinker, the creative one." He is very quick, witty, and always wins debates. Allen is "the number cruncher, very analytical." Benitez is "the real conservative one and the most organized."

In their personal lives, they unwind in different ways, but most of their downtime is spent with their families. Benitez, his wife, and two young boys just returned from a rare two-week vacation. The first week they were at Disneyworld, and an iPad kept him in touch with the business. A Caribbean cruise with his parents followed, and he was totally off line. "Rick can really check out and take a week or two off," says Allen, who tends to limit his travel to four-day weekends. He and his wife love the beach, and so do their three children. He clears his head after work by going for a drive in his 1960s vintage silver Cadillac convertible. Russo, his friends say, stays closer to home, "too nervous about being away from the office" for any length of time. "Anything we can do as a family-swimming in the backyard, throwing the ball around out front, going to Disneyland - is a good time for me," he notes.

It is obvious they have managed to balance their relationships at home, in business, and as friends.