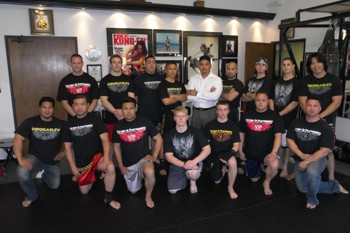 It's an unusual transition, from a mortgage business to a martial arts studio, but the link is very obvious to Anthony Morales, founder and CEO of the newly established Victory in Performance Mixed Martial Arts (VIPMMA). Morales, who started working in real estate in his teens, and whose California Capital Mortgage also occupies the space at 5627 Stoneridge Drive, attributes his success to the discipline he learned while training in the martial arts. While the mortgage business was one way to meet his personal goal of empowering others, the new studio moves further along that path, with its potential to trigger "life-transforming" change through a holistic, mind-body-spirit approach to wellness.

Morales' own martial arts odyssey began when he took up the Korean art of Tae Kwon Do at age six. While learning other martial arts styles such as Kajukenbo, he snared top honors in the Junior Nationals in 1983. He soon branched out into other areas of study, including Brazilian Jiu Jitsu and Thailand's national sport of Muay Thai. In founding VIPMMA he seeks to tap the ancient wisdom of traditional martial arts, combined with modern combat tactics and training, forging the old and the new - or the yin and the yang - into a curriculum appropriate to combat the stresses of corporate life today. "Much of the material on self-defense tactics and street survival techniques hasn't been available to the general public before, so it is an exclusive feature we offer," he proudly points out.

A lot of the current-day expertise comes from his partner Joseph Bannon, Ph.D., who blends an extensive and award-filled career in martial arts and law enforcement with a medical and scientific background in the trademarked Surgical Strike System. A former task force agent assigned to the U.S. Secret Service Presidential Protection Detail and a retired special agent with the Department of Justice Anti-Terrorism Unit, Joe brings "a wealth of practical knowledge and a broad perspective, especially in the art of mortal combat, that strengthens our foundation," Morales enthuses. Half a dozen other trainers round out VIPMMA's balance between "eastern and western philosophies, professional competition and street survival, and physical and mental fitness," he adds.

The major thrust of today's self-defense training is awareness. "It's not paranoia," Morales insists, but it does entail knowing what's going on around you all the time. "Being aware of one's surroundings is the biggest key in defense," he continues, turning to partner Bannon's background to illustrate his point. "The Secret Service has never once fired a gun while protecting the President. The hands are always a faster option than unholstering and firing a gun at an attacker. It's all about prevention before reaction, and that's the message we convey to civilians."