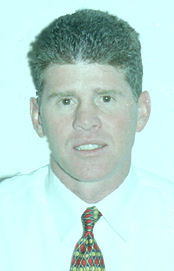 Don Cooper credits his father with teaching him the most important lessons about the insurance business.

"My father always said 'It's a people business.' I've never known anyone who was more concerned about his customers - if there was a problem, there was nothing he wouldn't do to solve it," he explains.

Cooper & Cook was founded in 1932 by Don's grandfather, making him the third generation of Coopers in the business. It puts Don in an interesting position as he balances tradition with market conditions now.

"Going into the family business is not an easy thing to do," he explains. "I think to be successful, there has to be a lot of give and take on part of the parents as well as the child going into the business."

He gives his dad a lot of credit for that as well.

"He was a very open individual," he says of his now-retired mentor. "He listened when I had ideas that made sense and when my ideas were outside the box for him and he didn't think it was going to work then we talked about that."

Don didn't originally plan on making a career in insurance. After finishing school, however, he went to work for the firm and found that he really enjoyed it.

"It's an opportunity to really help people," he says. "Insurance is something people have to have and a properly written and structured insurance program can be a tremendous benefit. It's gratifying to be able to deliver the claim check when a disaster or some other problem does occur."

Despite the perception that many have of insurance as a somewhat dry field, Don explains that it is really filled with variety.

"For example," he continues, "you might call on a construction company or a manufacturing concern, a hardware or software company it's really a wide variety of things to deal with day to day."

His favorite part of his job is establishing that contact and close relationship with his clients.

"A client calls with a problem and you have a solution. Over time, you develop trust, you develop a strong relationship with the client and that's extremely gratifying to me."

The insurance landscape is constantly changing as well, requiring him to study the market to keep abreast of new developments.

"I learn everyday," he says. "As insurance brokers, we need to be aware of any developments and changes in the law, to make sure our clients are informed and to help them make decisions."

One example of this, he explains, is Employment Practices Liability Insurance, one of the newer coverages that they offer.

"I think it's a very important part of corporate insurance so we always recommend it," he says. "It's new to some folks so we have to lay it out for them."

That particular coverage can be used to protect against costs incurred from wrongful termination lawsuits, which can be expensive to defend even in cases where no wrongdoing occurred.

The many demands he faces means that he plays a critical role in not just Cooper & Cook but in his clients' companies as well.

"I have a lot of clients who are very close friends now and they trust me, so I work very hard not to violate that trust. That's the driving force, it really is. I saw that side of the business and that's what I think attracted me to the business."

He started out doing administrative work: opening the mail, typing, filing. "In those days (1974), there were no computers and everything was done by hand."

Eventually he worked his way into sales, which is still an aspect of the job he enjoys.

"I always figured if you were generating revenue for a company, you would have some value so that they would keep you around," he grins.

That's when his education process really took off, thanks again to his father.

"He was in the business for 45 years, and when I first started I spent a lot of time tagging along with him, calling on his clients and seeing how he handled things," he explains.

"You need to know how to treat people, how to get to know people," he notes. "How do you ask questions to get them talking about their issues and concerns? Usually when you meet a new prospect, you get to 'peel the onion,' so to speak - They may be reluctant to open up initially, to get down to their core issues. They need to know that I'm not here to just get them to write a check and throw me their business, I'm here to develop a relationship."

There are several steps that Don sees as key to establishing that relationship. For example, he lists the items that go into writing policies for a manufacturer, one of his specialties.

"We go through an assessment process and go through their business from start to finish. Raw material comes in this end, finished product goes out that end, so what happens in between, and what are the different exposures that present themselves at the facility: the manufacturing, the equipment, the inventory, business interruption exposures, earthquake exposures, the liability exposures that are present at the facility but also after the product is in the marketplace The human side of it is the worker's compensation as well as the health insurance and business continuation items for the officers, 'key man' insurance for the key drivers of the company"

The list goes on and, with so much information required, it's clear why he emphasizes the importance of having a solid relationship with his customers. With the attention that he puts on all the details, though, it's certain that Don is a man they can depend on.